THE SPIRIT OF FORGIVENESS

“And be kind to one another, tenderhearted, forgiving one another, just as God in Christ forgave you.” (Ephesians 4:32)  An understanding of the biblical process of many believers. The pattern was establish by the Lord Jesus Christ when He forgave us. All true forgiveness follows His example – it is complete and satisfactory.

When people are ill or injured, they are eager to obtain physical healing. But this inner, spiritual restoration that results from forgiveness is far more important. When a believer has this attitude, he will greatly improve his own Body of Christ. Some feel that a secondary meaning of James 5:16 implies a relationship between forgiveness and physical confession and forgiveness, is effectual indeed! In fact the psalmist said, “If I had cherished sin in my heart, the Lord would not have listened” (Psalms 66:18).

1.       It is offered to all. Forgiveness patterned after the example of Christ will involve the following: no matter who is wronged, and regardless of the nature of the offense, forgiveness must not be withheld. Christ pardon is freely given without discrimination the same is true of salvation. It is for "Everyone who calls on the name of the Lord will be saved." (Romans 10:13 in).

2.       It is without stipulation. We are not to place conditions or requirements upon the one asking our forgiveness. He is merely to receive it. There is to be no obligation. The definition of forgiveness makes clear that no requital is claimed. The father's forgiveness to us is complete and free. We are to offer it to others in precisely the same way (see Peter's question in Matthew 18:21, 22)

3.       Is extended outward. No one is to come and beg forgiveness. This complies with the injunction given in 1Corinthians 10:32;" give no offense." True forgiveness also" takes no offense." The spirit of Christ working in us would never require others to do ask of penance, promise to do better, I'll give an apology, (though one may be forthcoming).

4.       It is never withdrawn. The hand if forgiveness is always held out; and whenever it is accepted, full pardon is granted. Paul wrote; Bear with each other and forgive whatever grievances you may have against one another”. (Colossians 3:13).

5.       It acts as if no wrong were done.The sincere follower of Christ does not treat a person any differently before he asks for forgiveness then he would afterwards. Problems of bitterness, wrath, anger, clamor, and evil speaking are thereby solved (Ephesians 4:31). A forgiving spirit covers a multitude of sins, as does love (1 Peter 4:8). Love and forgiveness are mates.

6.       It is offered prior to the offense. On the cross Jesus said "father, forgive them, for they know not what they do" (Luke 23:34). Before the dreadful act of crucifixion was completed, Christ had are ready granted his forgiveness. When his spirit controls us, we still not broad over those who offended us; we won't hold grudges or seek to retaliate

7.       It is a serious matter. We are not to obtain forgiveness with a flippant “I am sorry." That has no meaning. The offer of an apology must come from a sincerely changed hart. It involves true contrition, sorrow, and a willingness not only to confess the sin but also to forsake it. Godly sorrow brings repentance that leads to salvation and leaves no regret, but worldly sorrow brings death. (2 Corinthians 7:10). Personal, family, and church renewal is the blessed result when genuine forgiveness is offered and received.

8.       It has reward and a fruit. The impact of forgiveness is threefold. Upon the one who gives it, there is the deep satisfaction of life that comes with compliance to the holy Scripture. To the one who receives it, there is than needed reconciliation and peace within, and a renewed unity with others. To those who witness it, the tenderness of Christian unity and love is reestablished in Christ is glorified.

To refuse forgiveness or to oblige the offender to go through a series of belittling acts to regain favor denies the word of truth. It also brings a stalemate, even a series of ever difficult reverses. Relationships are smothered, the mind is in turmoil, fellowship is in., And witness for Christ is reward by in under forgiving spirit. We can tell all the side effects of the refusal to forgive. Inner malice, wrath, evil, surmising, anger (plus the accompanying ulcers and distress emotions), and pride fostered by a stubborn unwillingness to forgive. Can we personally allow this? Can that cause of Christ afford the body being divided, injured, and disadvantaged, by lack of forgiveness? Absolutely not!

THIS FINAL WORD; FORGIVE, AND THEN FORGET! THESE TWO WORDS ARE ADJACENT IN THE DICTIONARY. WHY NOT ALSO IN THE EXPERIENCE OF THE BELIEVER?﻿ 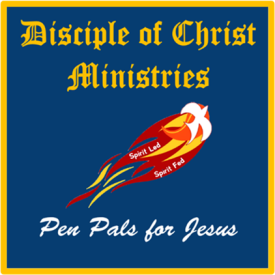 We are always happy to pray for those who are in need of prayer.

We would love to include you in our prayer hour with our Heavenly Father.

Text your prayer request to

Please will you help support this Ministry.

Since the foundation of Disciple of Christ Ministries were laid in May 2012, we have taken a vision given to me while serving time myself, to now a thriving outreach ministry reaching across the country. We are doing this through Pen Pals for Jesus, our correspondence by mail Prison Ministry. Currently we are serving over 525 inmates across 41 states, matching them with Christian men and women volunteers who share hope and encouragement through letters of Christian support.

Disciple of Christ Ministries boldly goes into the darkest places to shine the Light of the Gospel for others to see! In 2022, we saw a growth rate of 21%, bringing a strain on our resources across the board. Leaving us to reach out to churches and organizations inviting them to join us in our efforts in building the Kingdom of God.

Any love gift amount would be used

for the glory of God.

Thank you in advance

and may God bless you!